HAMLET
Gentlemen, you are welcome to Elsinore. Your hands,
come then: the appurtenance of welcome is fashion
and ceremony: let me comply with you in this garb,
lest my extent to the players, which, I tell you,
must show fairly outward, should more appear like
entertainment than yours. 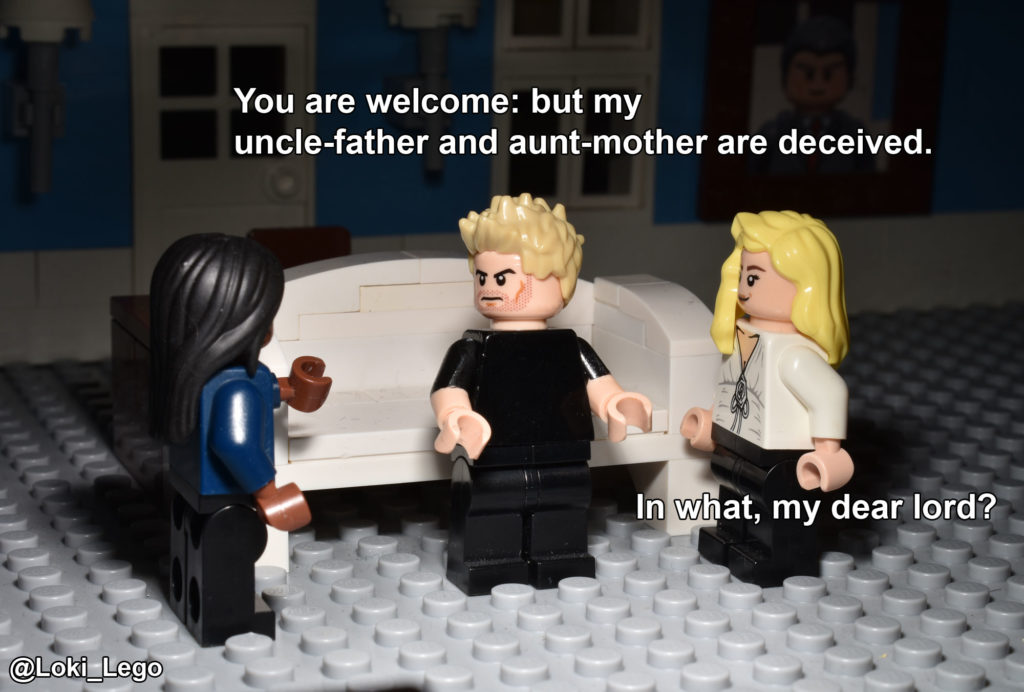 GUILDASTERN
In what, my dear lord? 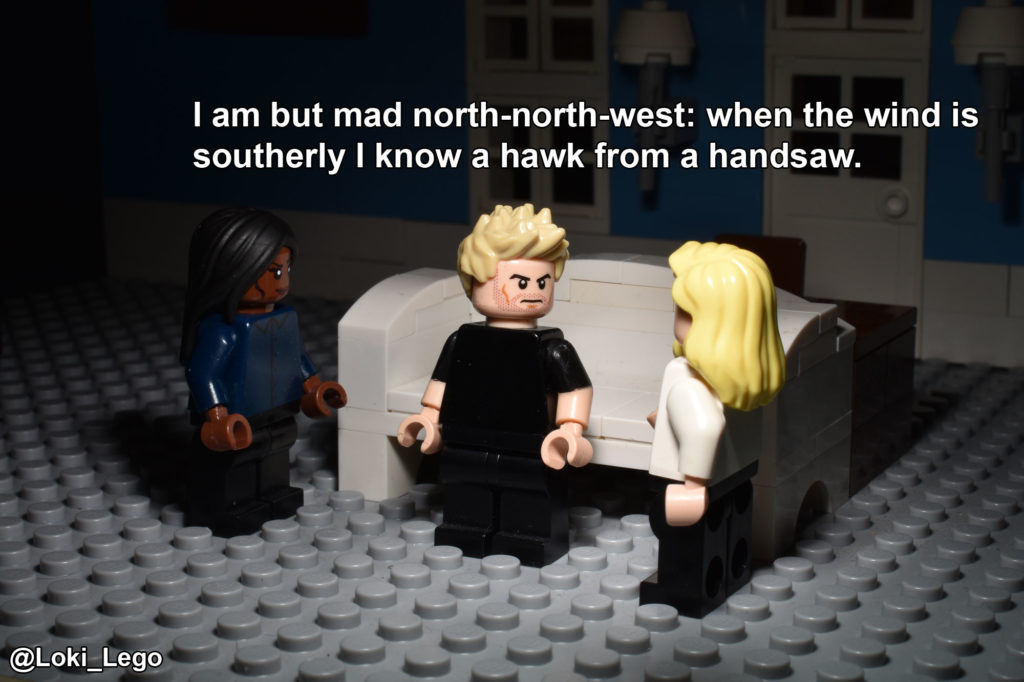 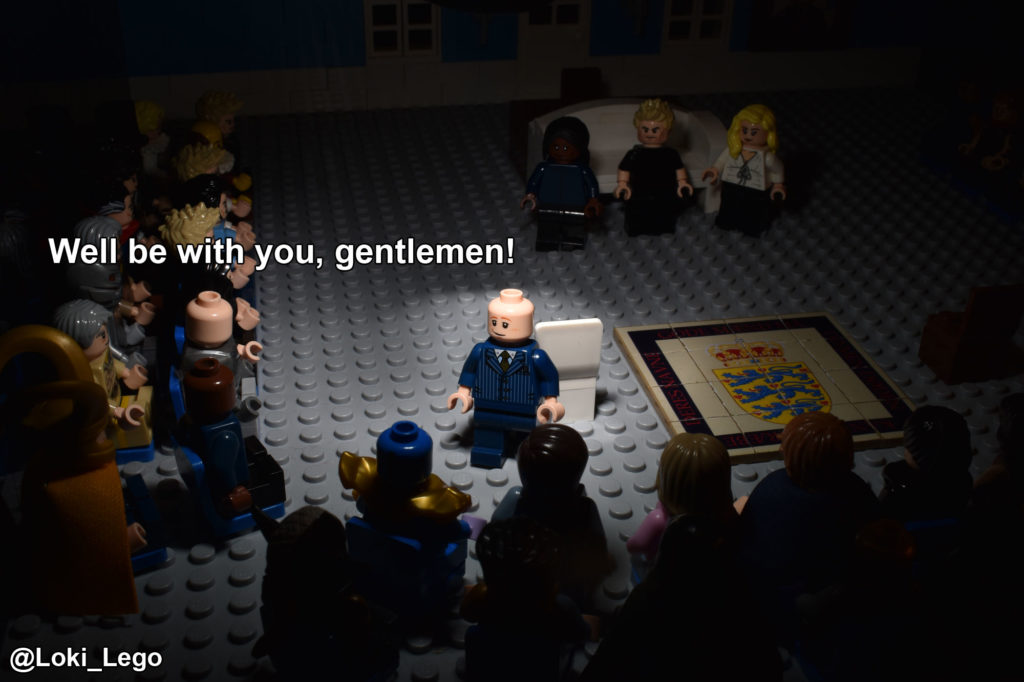 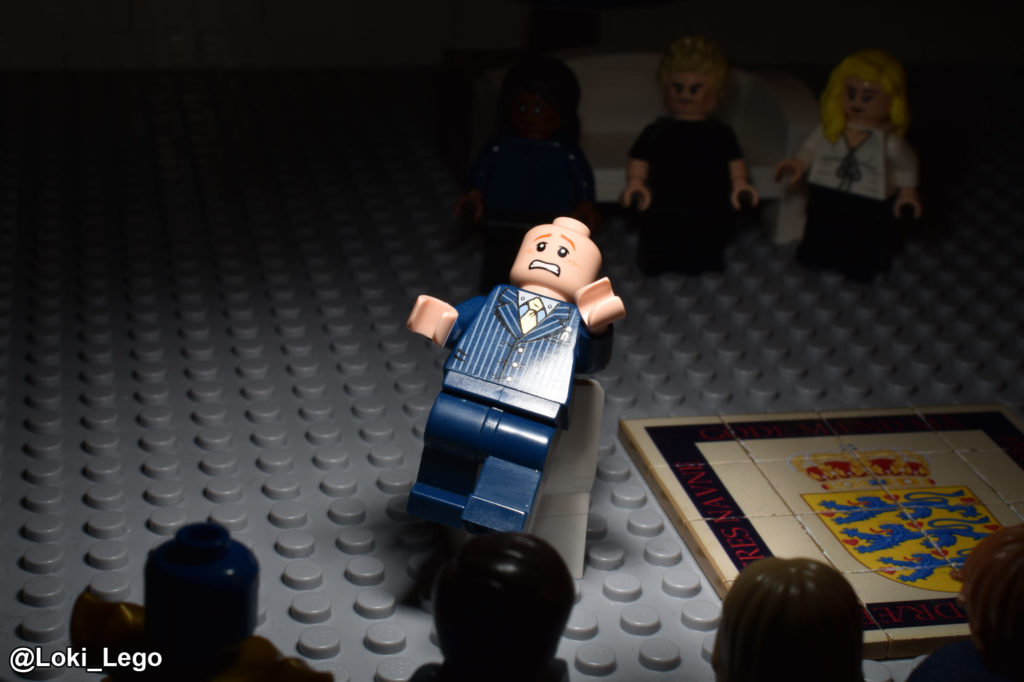 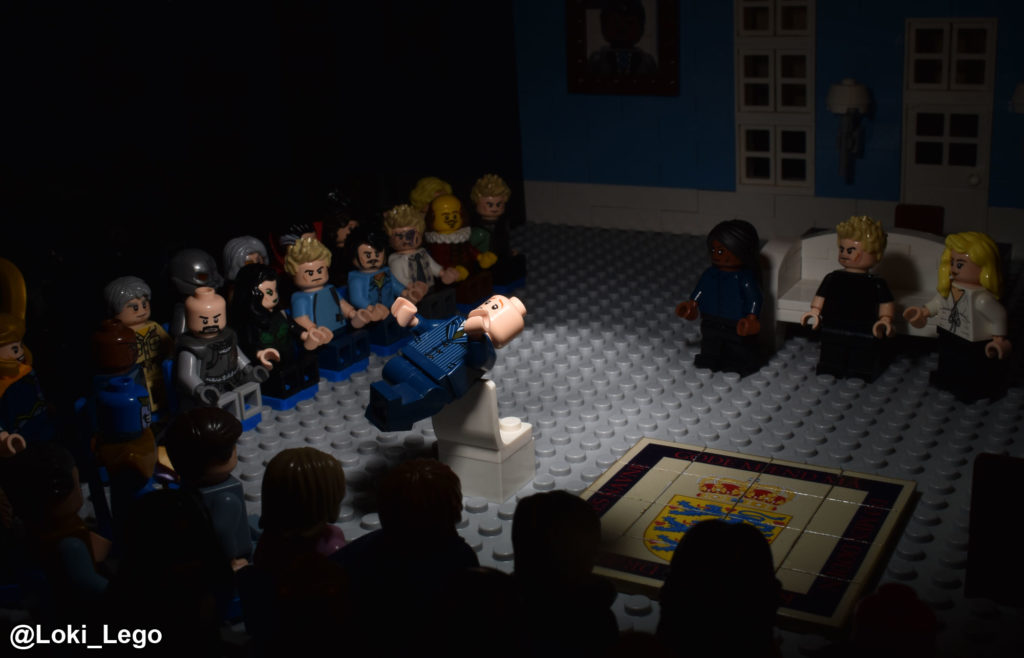 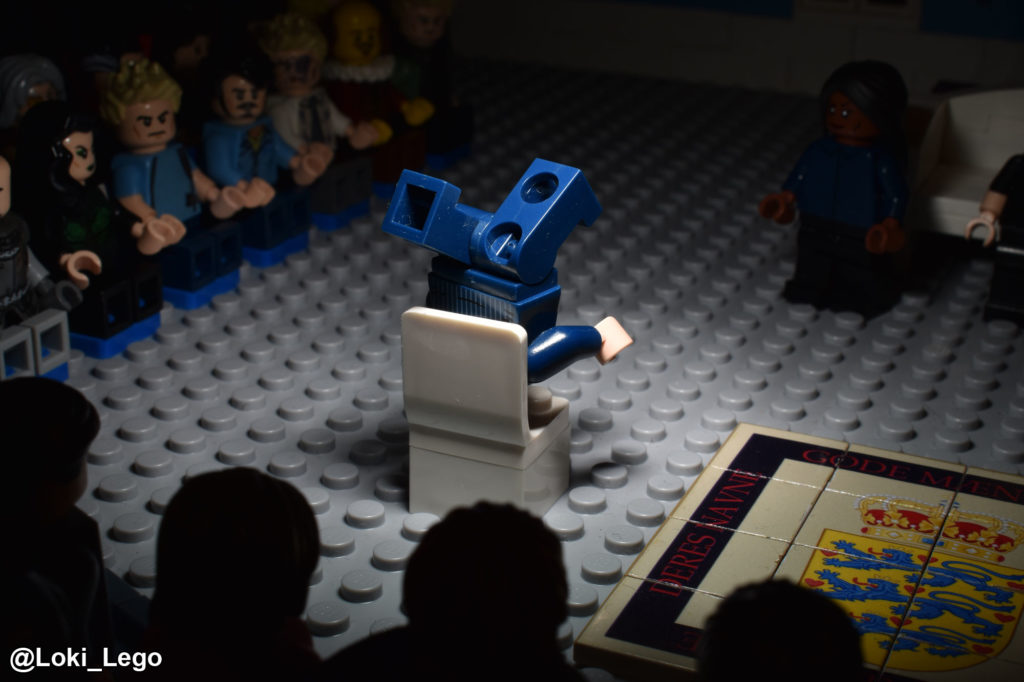 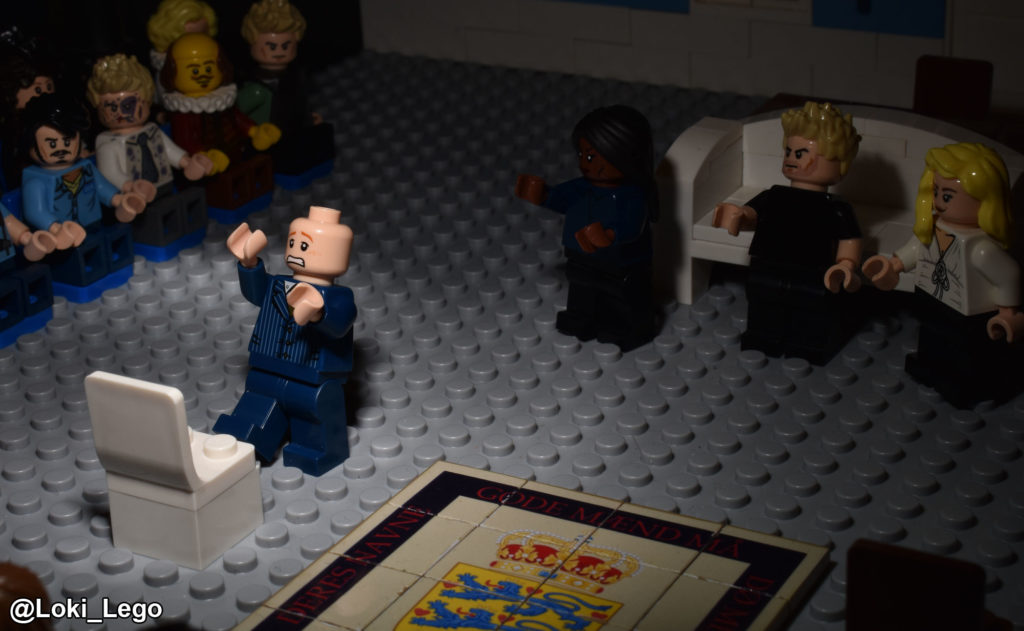 HAMLET
Hark you, Guildastern; and you too: at each ear a
hearer: that great baby you see there is not yet
out of his swaddling-clouts.

ROSACRANTZ
Happily he’s the second time come to them; for they
say an old man is twice a child.

HAMLET
I will prophesy he comes to tell me of the players;
mark it. You say right, sir: o’ Monday morning;
’twas so indeed. 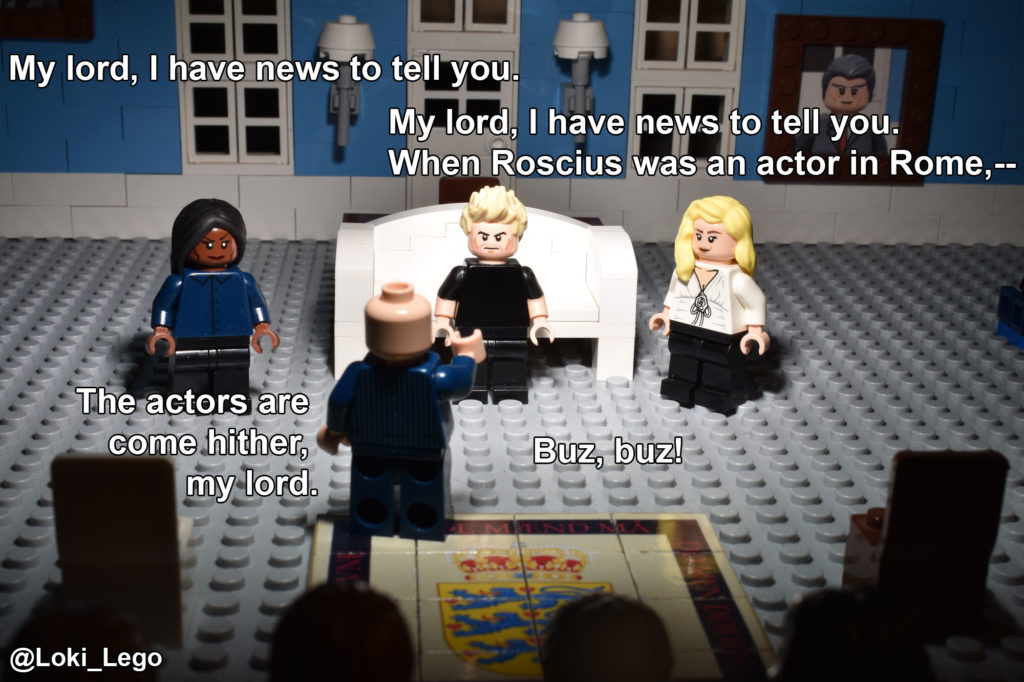 LORD POLONIUS
Upon mine honour,–

HAMLET
Then came each actor on his ass,– 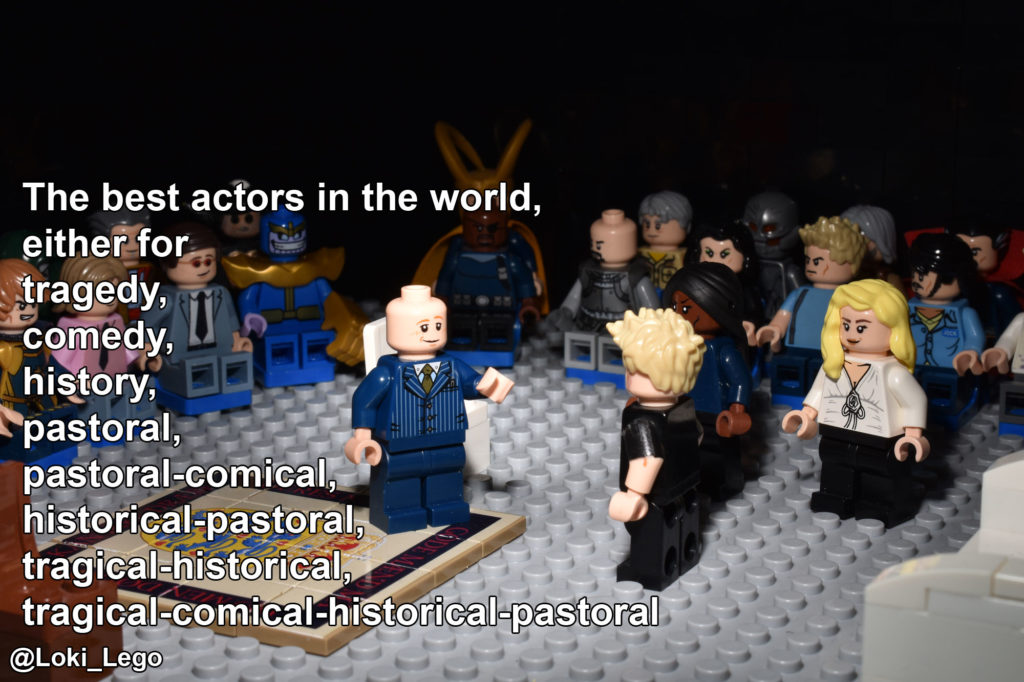 LORD POLONIUS
Scene individable, or
poem unlimited: Seneca cannot be too heavy, nor
Plautus too light. For the law of writ and the
liberty, these are the only men. 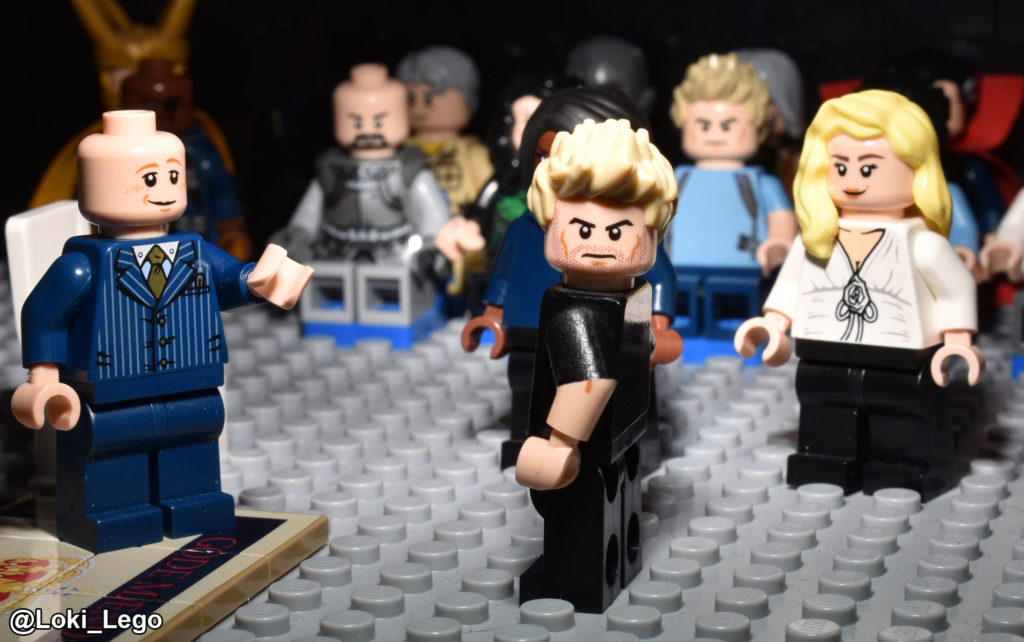 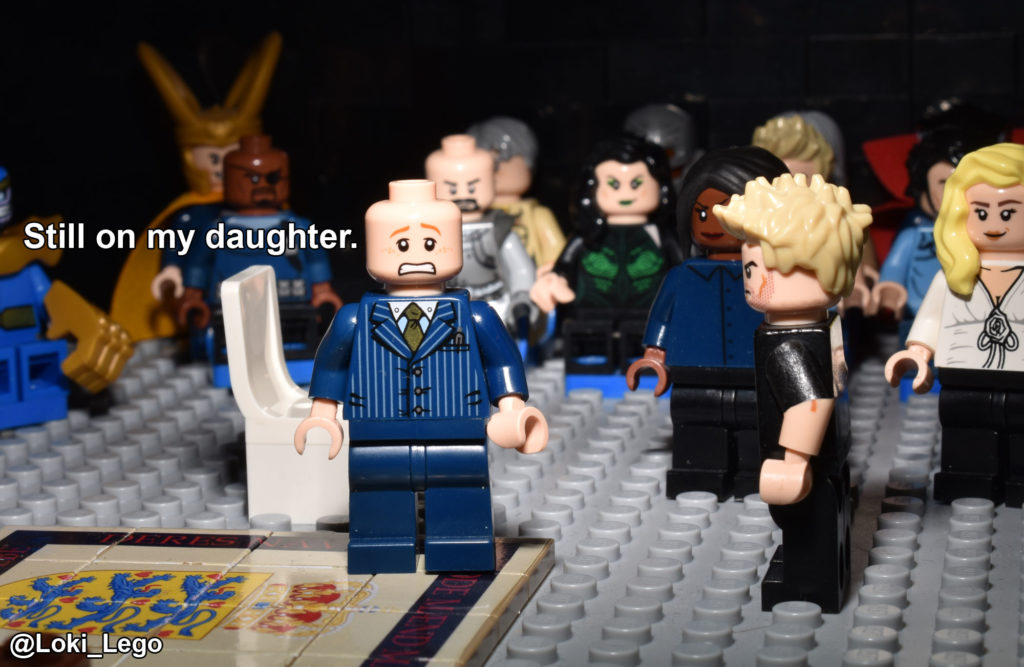 HAMLET
Am I not i’ the right, old Jephthah?

LORD POLONIUS
If you call me Jephthah, my lord, I have a daughter
that I love passing well.

HAMLET
Nay, that follows not.

LORD POLONIUS
What follows, then, my lord?

HAMLET
Why,
‘As by lot, God wot,’
and then, you know,
‘It came to pass, as most like it was,’–
the first row of the pious chanson will show you
more; for look, where my abridgement comes. 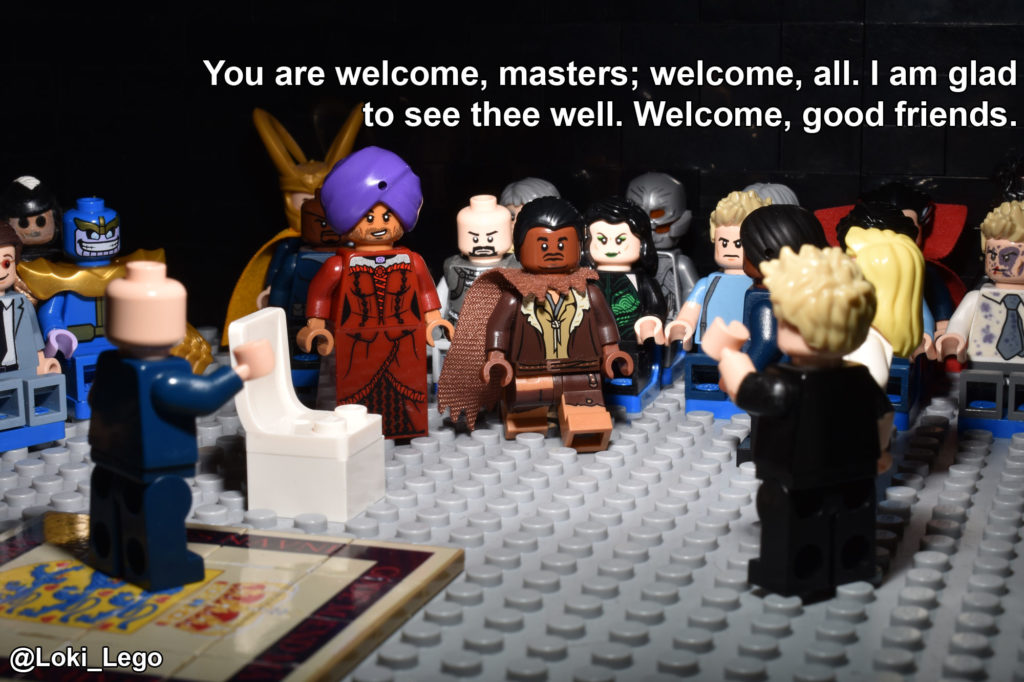 HAMLET
O, my old friend! thy face is valenced since I saw thee last:
comest thou to beard me in Denmark? What, my young
lady and mistress! By’r lady, your ladyship is
nearer to heaven than when I saw you last, by the
altitude of a chopine. Pray God, your voice, like
apiece of uncurrent gold, be not cracked within the
ring. Masters, you are all welcome. We’ll e’en
to’t like French falconers, fly at any thing we see 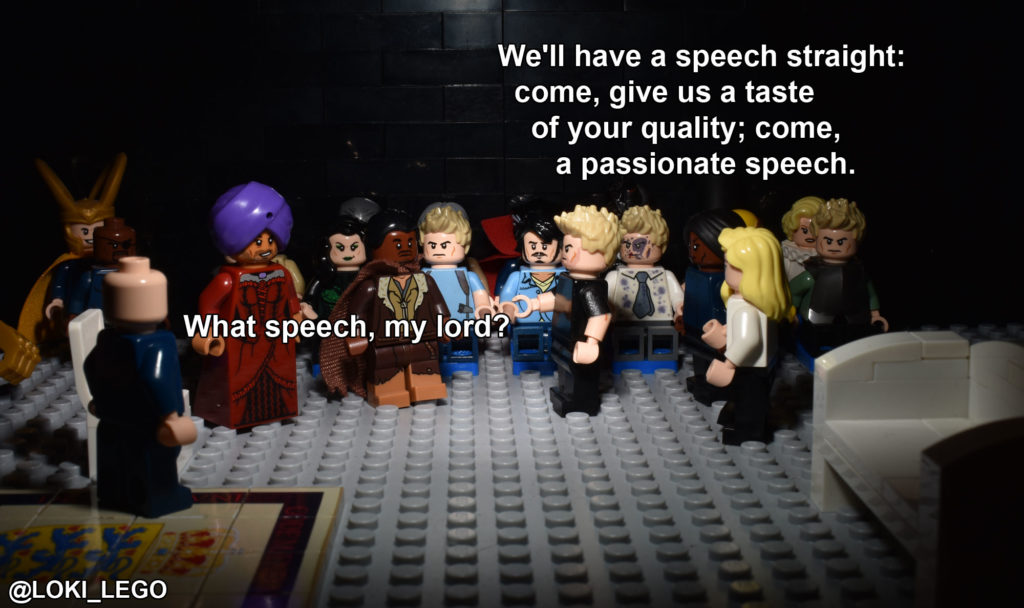 HAMLET
I heard thee speak me a speech once, but it was
never acted; or, if it was, not above once; for the
play, I remember, pleased not the million; ’twas
caviare to the general: but it was–as I received
it, and others, whose judgments in such matters
cried in the top of mine–an excellent play, well
digested in the scenes, set down with as much
modesty as cunning. I remember, one said there
were no sallets in the lines to make the matter
savoury, nor no matter in the phrase that might
indict the author of affectation; but called it an
honest method, as wholesome as sweet, and by very
much more handsome than fine. One speech in it I
chiefly loved: ’twas Aeneas’ tale to Dido; and
thereabout of it especially, where he speaks of
Priam’s slaughter: if it live in your memory, begin
at this line: let me see, let me see–
‘The rugged Pyrrhus, like the Hyrcanian beast,’–
it is not so:–it begins with Pyrrhus:–
‘The rugged Pyrrhus, he whose sable arms,
Black as his purpose, did the night resemble
When he lay couched in the ominous horse,
Hath now this dread and black complexion smear’d
With heraldry more dismal; head to foot
Now is he total gules; horridly trick’d
With blood of fathers, mothers, daughters, sons,
Baked and impasted with the parching streets,
That lend a tyrannous and damned light 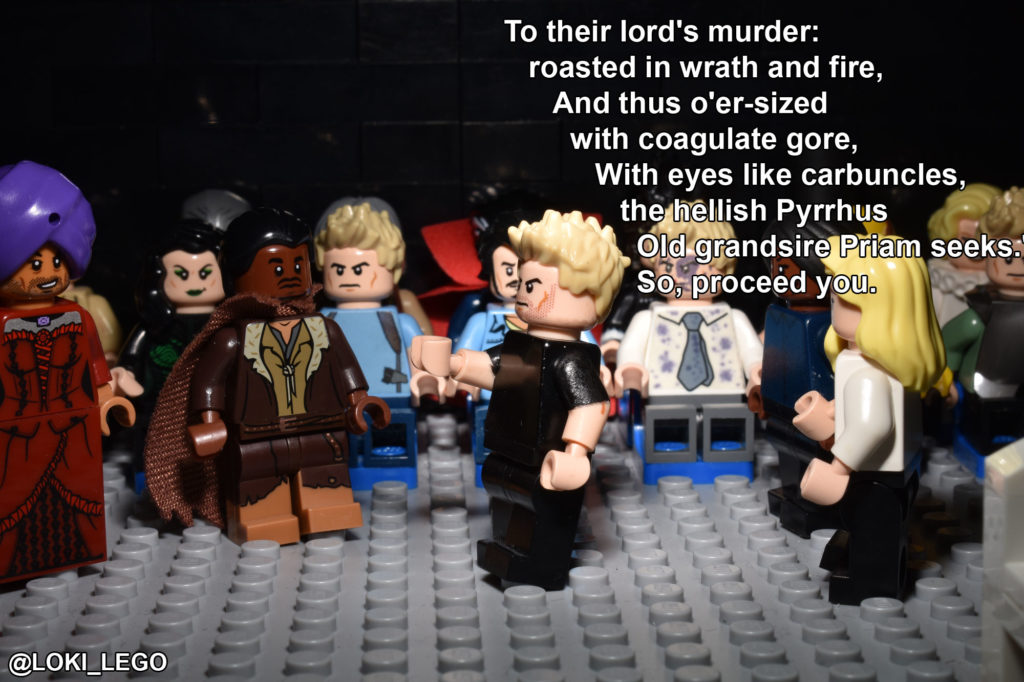 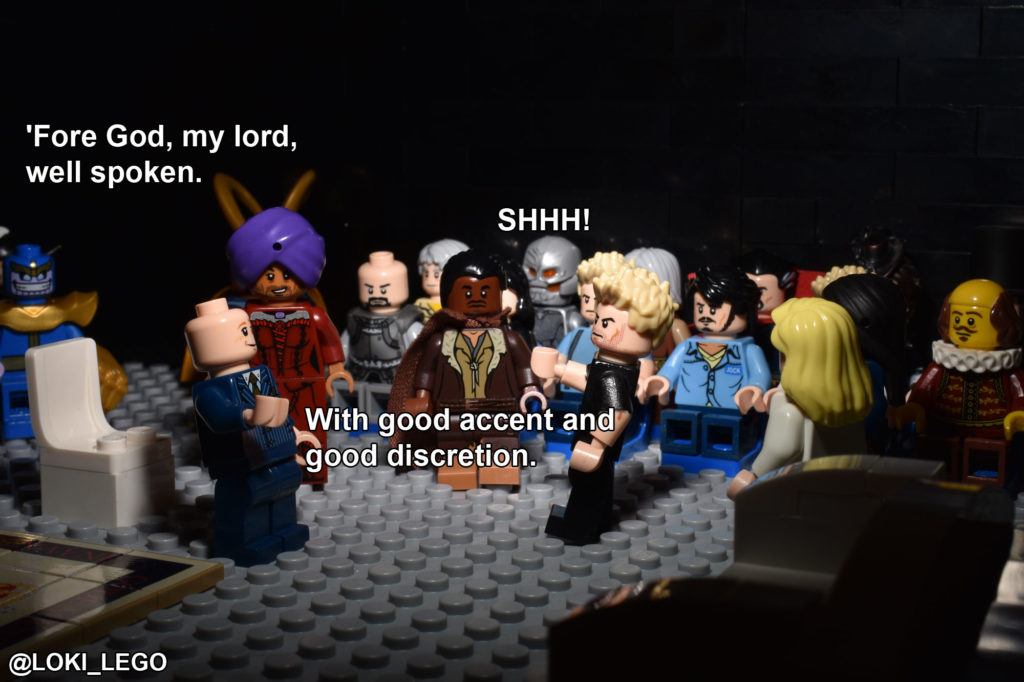 First Player
‘Anon he finds him
Striking too short at Greeks; his antique sword,
Rebellious to his arm, lies where it falls,
Repugnant to command: unequal match’d,
Pyrrhus at Priam drives; in rage strikes wide;
But with the whiff and wind of his fell sword
The unnerved father falls. Then senseless Ilium,
Seeming to feel this blow, with flaming top
Stoops to his base, and with a hideous crash
Takes prisoner Pyrrhus’ ear: for, lo! his sword,
Which was declining on the milky head
Of reverend Priam, seem’d i’ the air to stick:
So, as a painted tyrant, Pyrrhus stood,
And like a neutral to his will and matter,
Did nothing.
But, as we often see, against some storm,
A silence in the heavens, the rack stand still,
The bold winds speechless and the orb below
As hush as death, anon the dreadful thunder
Doth rend the region, so, after Pyrrhus’ pause,
Aroused vengeance sets him new a-work; 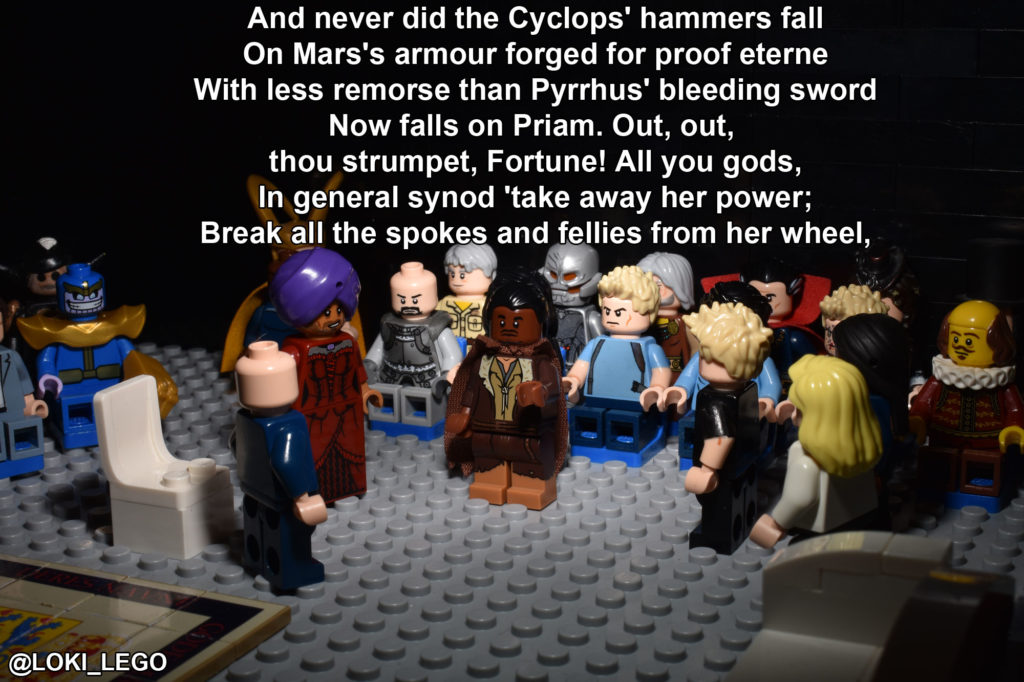 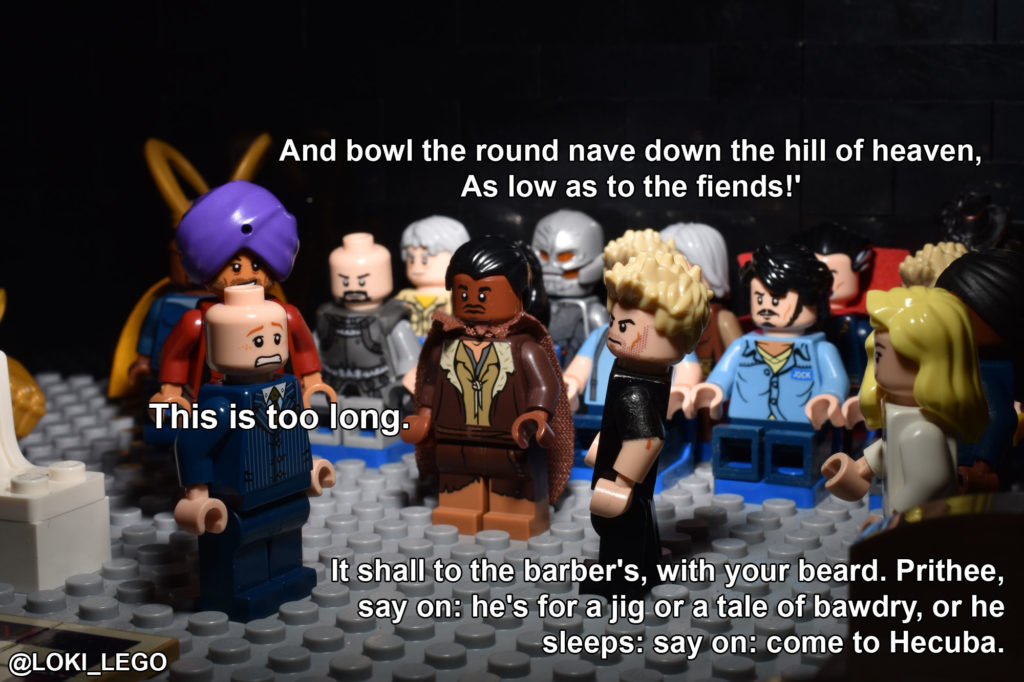 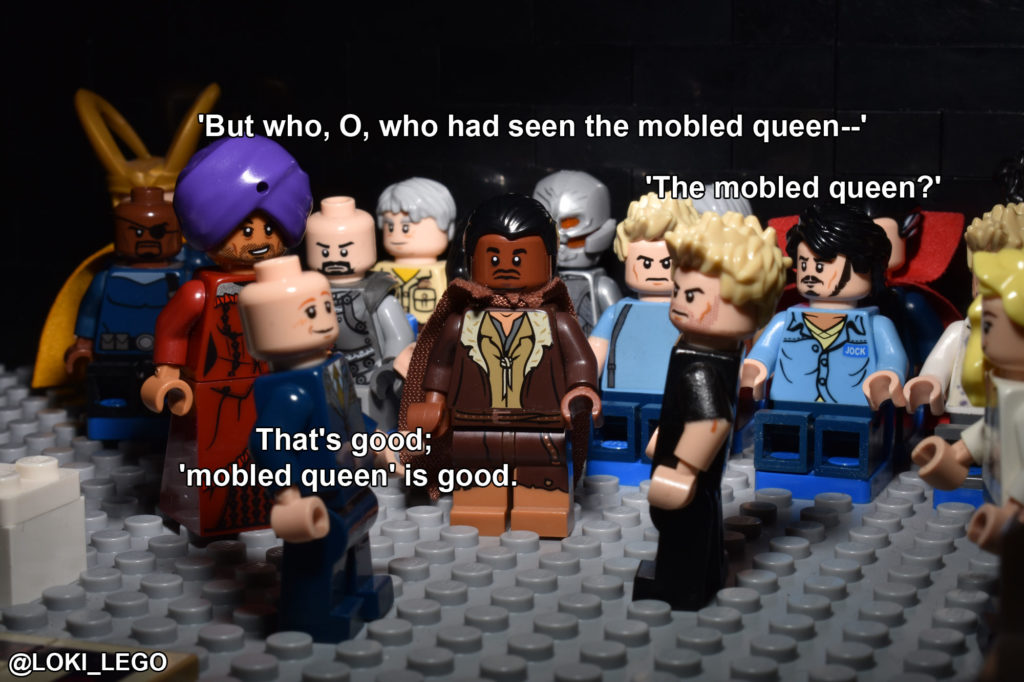 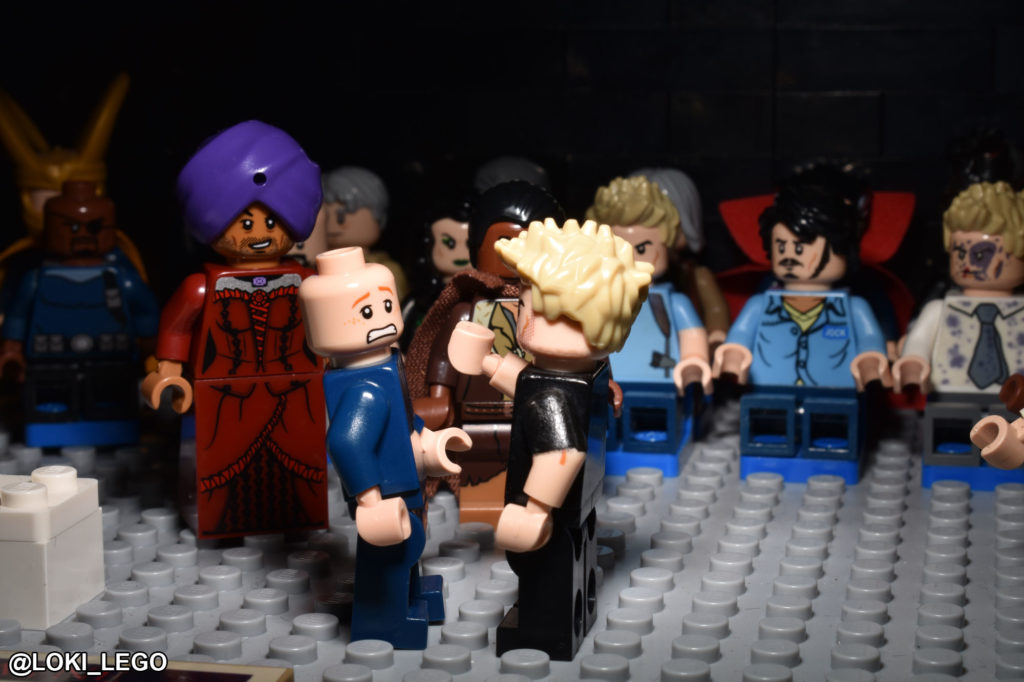 First Player
‘Run barefoot up and down, threatening the flames
With bisson rheum; a clout upon that head
Where late the diadem stood, and for a robe,
About her lank and all o’er-teemed loins,
A blanket, in the alarm of fear caught up;
Who this had seen, with tongue in venom steep’d,
‘Gainst Fortune’s state would treason have
pronounced:
But if the gods themselves did see her then
When she saw Pyrrhus make malicious sport
In mincing with his sword her husband’s limbs,
The instant burst of clamour that she made,
Unless things mortal move them not at all,
Would have made milch the burning eyes of heaven,
And passion in the gods.’

LORD POLONIUS
Look, whether he has not turned his colour and has
tears in’s eyes. Pray you, no more.

HAMLET
‘Tis well: I’ll have thee speak out the rest soon.
Good my lord, will you see the players well
bestowed? Do you hear, let them be well used; for
they are the abstract and brief chronicles of the
time: after your death you were better have a bad
epitaph than their ill report while you live.

LORD POLONIUS
My lord, I will use them according to their desert.

HAMLET
God’s bodykins, man, much better: use every man
after his desert, and who should ‘scape whipping?
Use them after your own honour and dignity: the less
they deserve, the more merit is in your bounty.
Take them in. 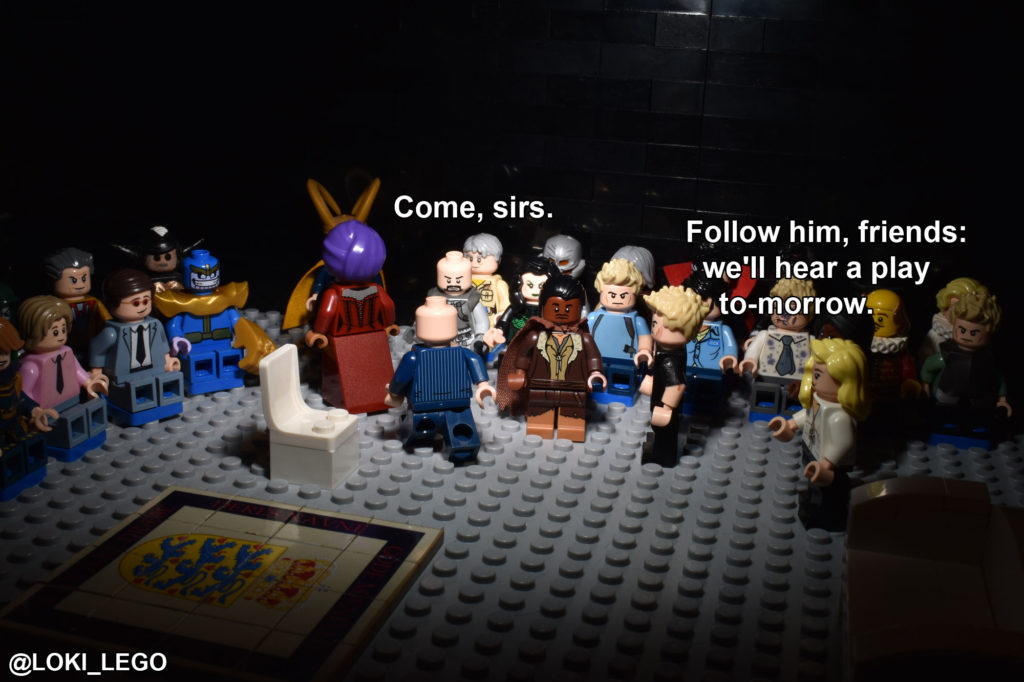 Exit POLONIUS with all the Players but the First 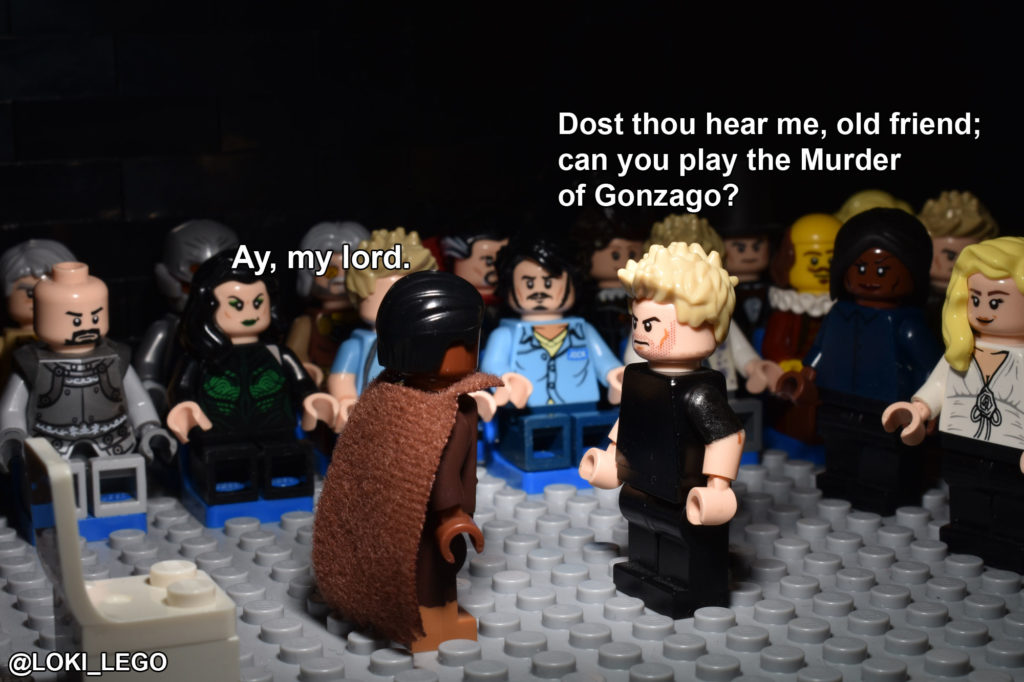 HAMLET
We’ll ha’t to-morrow night. You could, for a need,
study a speech of some dozen or sixteen lines, which
I would set down and insert in’t, could you not?

HAMLET
Very well. Follow that lord; and look you mock him
not. 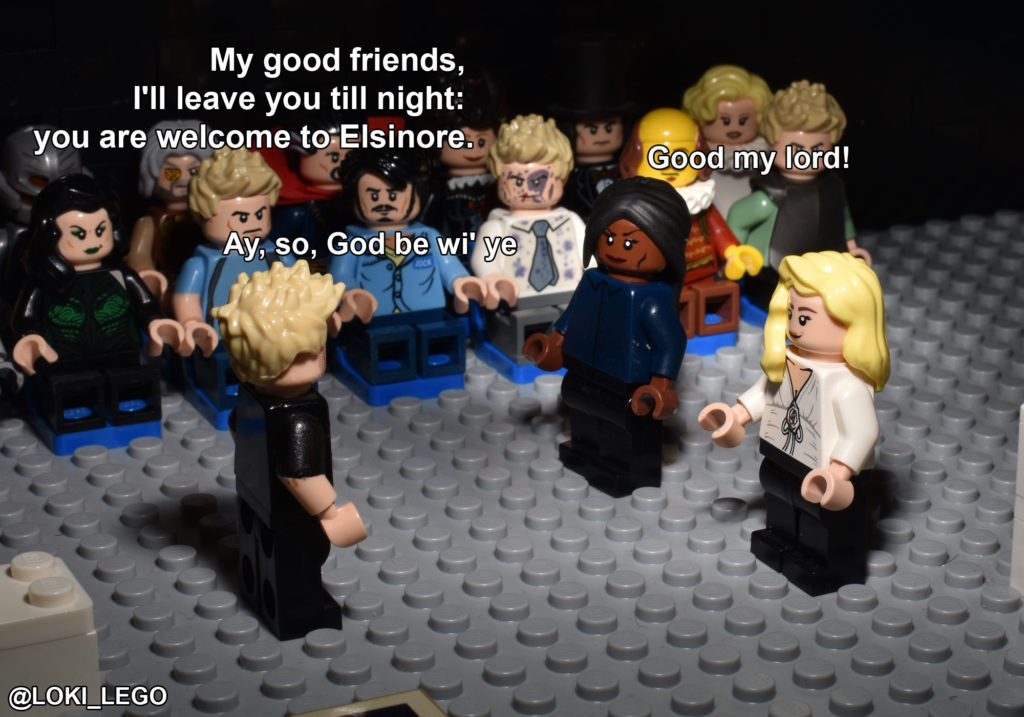 HAMLET
What’s Hecuba to him, or he to Hecuba,
That he should weep for her? What would he do,
Had he the motive and the cue for passion
That I have? He would drown the stage with tears
And cleave the general ear with horrid speech,
Make mad the guilty and appal the free,
Confound the ignorant, and amaze indeed
The very faculties of eyes and ears. Yet I,
A dull and muddy-mettled rascal, peak,
Like John-a-dreams, unpregnant of my cause,
And can say nothing; no, not for a king,
Upon whose property and most dear life
A damn’d defeat was made. Am I a coward?
Who calls me villain? breaks my pate across?
Plucks off my beard, and blows it in my face?
Tweaks me by the nose? gives me the lie i’ the throat,
As deep as to the lungs? who does me this?
Ha! 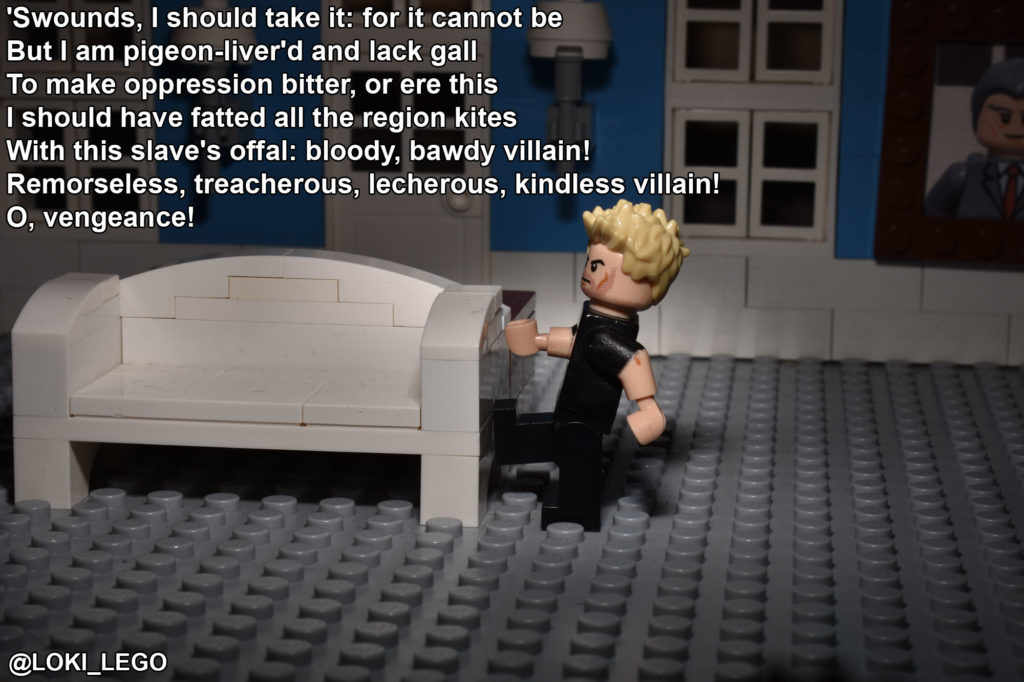 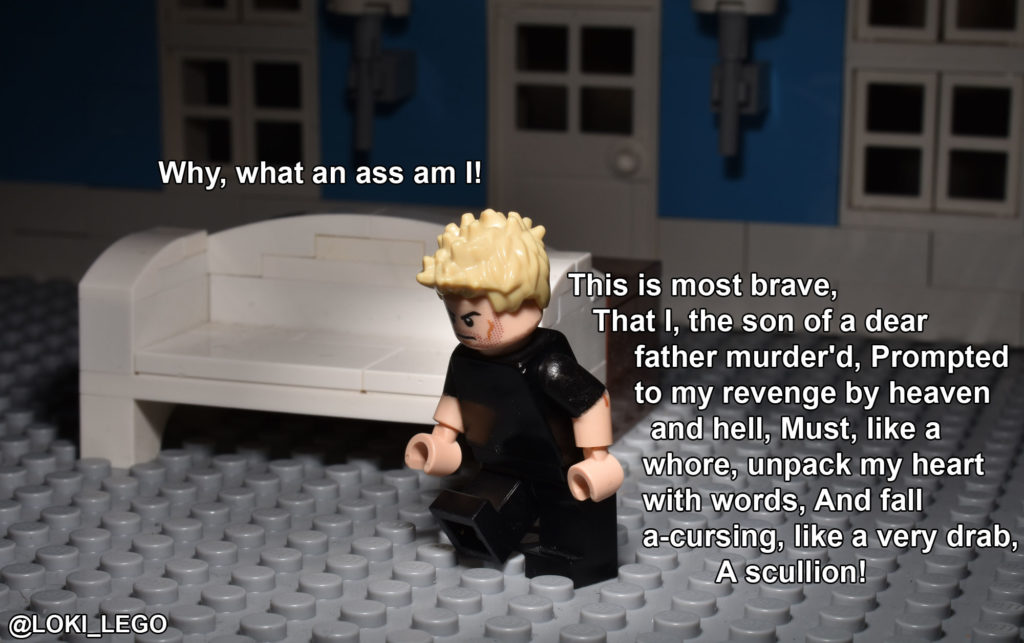 HAMLET
Fie upon’t! foh! About, my brain! I have heard
That guilty creatures sitting at a play
Have by the very cunning of the scene
Been struck so to the soul that presently
They have proclaim’d their malefactions;
For murder, though it have no tongue, will speak
With most miraculous organ. I’ll have these players
Play something like the murder of my father
Before mine uncle: I’ll observe his looks;
I’ll tent him to the quick: if he but blench,
I know my course. The spirit that I have seen
May be the devil: and the devil hath power
To assume a pleasing shape; yea, and perhaps
Out of my weakness and my melancholy,
As he is very potent with such spirits,
Abuses me to damn me: I’ll have grounds
More relative than this: 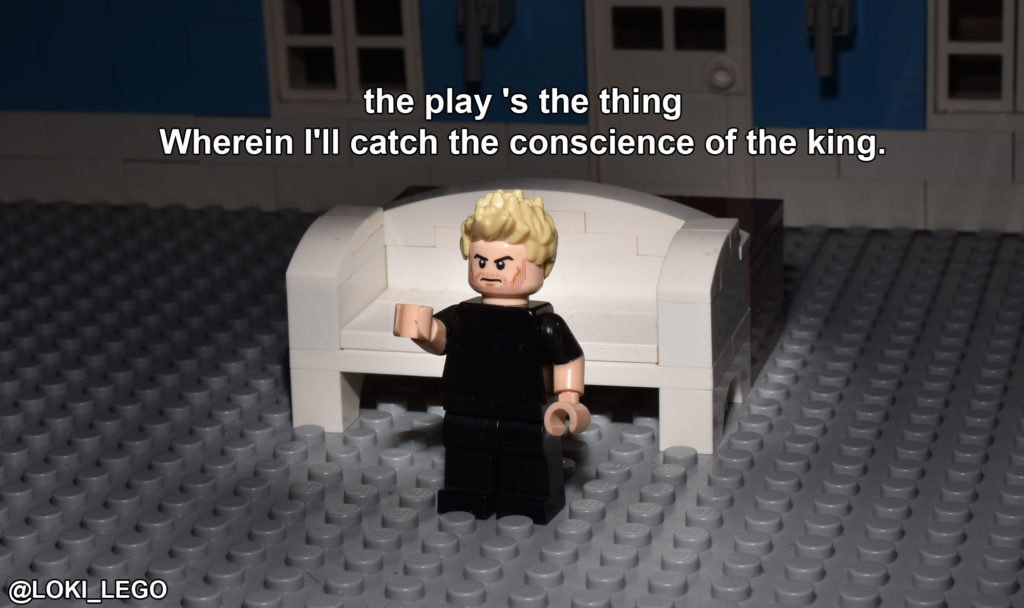